Once upon a time, many cycles ago, there was a naive wife and banker who never ventured outside of her simple yet pleasant little northern village. Life for this young wife was easy. She developed a blossoming career and married a prince of a husband. The merry couple traveled, played, enjoyed friends and family, and nestled into their quaint little corner of the world to live happily ever after.

Then one day this wife decided she needed more. Something was missing and she knew just what it was and where to find it. Thus, the determined wife and her doting husband set off on a sojourn to the Kingdom of Parenthood.

The merry couple knew others that made the trek many times without event. Therefore the couple was confident they would safely arrive and be warmly welcomed into this coveted community. However, along the way the happy pair was tragically lost.

The merry couple awoke one day shocked to discover they were stuck in the Land of Infertility.

At first, they tried to find their way to Kingdom Parenthood with only the help of the doctors. But after a few wrong turns, the wife eventually met and was warmly taken in by the Royal Family that rules the Land of IF…

The Queens and Princesses of Pee. 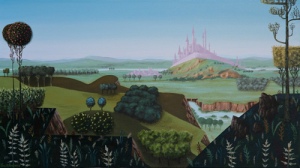 Bill and I didn’t try to conceive for long prior to learning my tubes were blocked and IVF would be the only way for us to have a baby. In fact, by the time we started IVF I took more pregnancy tests hoping not to be pregnant than I took praying for those two magical lines. As a result, after our first IVF it never occurred to me to take a home pregnancy test. I simply assumed the clinic knew the exact date your pregnancy test could be positive and taking a home pregnancy test before the scheduled blood test would be futile.

Once that first cycle failed, I did what any type A overachiever would do and began surfing the web in attempt to understand what happened and how I could fix it. Four years later I still don’t have those answers and never will, but what I do have is a community of women, and a few men, that I can lean on for advice and support. These strong people are my close neighbors in the Land of Infertility.

Among women living in the Land of Infertility there are two distinct groups:

Those who POAS (Pee On a Stick) during the two week wait, and those who don’t.

Most women are fanatics either way and actively try to recruit other infertiles to their side. Self titled “Pee Princesses” are the worst of the bunch and among them are a few higher ranking queens. These Queens of the Pee are so hooked on home pregnancy tests they aggressively work to convert other hopeful infertility sufferers to their cult. I assume The Queens are attempting to live vicariously through aspiring Pee Princesses when they themselves are between cycles and can’t get a fix.

By the time our third transfer rolled around, I decided to dip my toe in the water and give peeing a try. For me, an over-thinker and worrier, the choice was devastating. I started testing at 9 days past retrieval which is not the earliest you can get a positive result, but its close. At 9 days you are still more likely to get a negative result than a positive.

Of course my test was negative. And so it went for days 10, 11, 12, and so on. I was a weeping mess by the time of the blood test. A horrible, negative, stressed out, depressed, weeping mess.

I promised Bill I would never do it again.

The next cycle gave us Spork and I kept my promise not to pee after the last emotional disaster. Instead my blood was drawn as scheduled at a random clinic in South Carolina while I was there for 10 days on business.  I learned the best news I ever received by listening to a voicemail while on a break from a meeting. I was finally pregnant! Of course after the call I immediately went out and bought several pregnancy tests just so I could see that beautiful second line for the first time in my life. 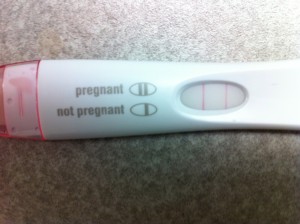 Spork tainted my pee and turned pregnancy this test positive on May 19, 2011

Two years later in our effort to give Spork a sibling I forgot my promise to Prince Bill and dove head first off the pee wagon. I even went so far as to buy 50 cheapie tests from the Internet for our fresh cycle last spring. When those ran out I ordered 50 more and eventually used every last one of them.

Its not POAS related, but who doesn’t like funny cat photos?

During second cycle for baby number two, our miscarriage cycle, I was testing three times a day or more to assess whether the lines were darkening. I lined all the tests up chronologically and glued them to a piece of paper to review the progression, writing my HCG levels next to them on blood test days. I compared my obsessive little chart to others on the Internet, attempting to divine the outcome of the difficult cycle with the erratic blood test results. I tested every day for TWENTY days.

These are only the best of the tests.
I took a total of 44 over the course of the cycle.

For our most recent cycle in January I had only 5 tests remaining from the original 100 and vowed they would be the last sticks I would ever douse with my pee.

I would stare at the tests under different lights and even go outside to see if I could spot a line in natural light. I revisited tests several hours after I took them, examining the result area closely for what seemed like hours. I even fished tests out of the trash the next day to make sure that a line didn’t develop overnight.

I spent countless hours on Countdown to Pregnancy, my favorite Pee-Aholic site. It is one of literally hundreds out in cyberspace dedicated to fueling this horrible addiction. The sites will tell you how likely you are to score a positive result by brand of pregnancy tests and by number of days past ovulation. You can post pictures of your pee sticks and have others weigh in on whether they see a line. And so much more…

Who knew such a network of pee stick pushers existed? Sadly, I became one of their highest ranking members. I was a full on Queen of the Pee and I needed to kick the habit. It was hard on me and it was even harder on Bill. His hope was also dashed with every negative test, but he had the added bonus of dealing with my sadness every time my pee would let me down.

This cycle I am turning in my crown, stepping down from my throne and going back to life in the other camp of infertiles.

No more pee sticks for me. Not now. Not ever.

Make no mistake, there are advantages to peeing on a stick. The miracle second line could appear, showering you with exultant joy and taking the edge off the two week wait.  Additionally, for long time inhabitants of the Land of Infertility, learning that you are pregnant the “normal” way is quite appealing. So much of what we go through to get pregnant is is clinical. Learning through a home test instead of yet another blood draw just feels so natural.

Finally, some women let their pee flow because they like to be prepared mentally for the phone call from the clinic, especially if it is bad news. Its no fun crying to a practical stranger over the phone. This was a primary motivator for me, as much to make it easier on me as to make it easier on the nurse calling me. No matter how many times they do it, I know those calls are hard for the nurses.

So there are many arguments for peeing prior to the HCG test. I do not begrudge any princess her tiara. It would be hypocritical for this reformed abuser to do so. Unlike many recovering addicts, I also refuse to push my new perspective on anyone else. I’m not saying my way is the right way.

Its just the right way for me.

~ my not so glamorous but oh so blessed life ~

Infertility Is A Journey; Not A Destination