And yet it begins.

“Blob” as we are calling him (or her) is now resting peacefully at home, preparing to burrow into my lining and take root for the next nine months.  It was a harrowing, exciting, and ultimately pleasant experience which began with our wondering whether we would be transferring Blob at all.

Yesterday at the top of Breck’s Peak Six, I picked up a call from the clinic asking if I could come in right away for a cautionary ultrasound. It seemed the doctor was concerned about my cyst and the pain from the night before. Rather than blow our day of boarding we opted to arrive very early this morning to check on the status of my temperamental reproductive system. Until about 7:30 this morning we feared we would be coming home empty handed (or in this case empty “uterused”). Luckily the lining, ovaries, and vitals all checked out fine and we continued with the embryo transfer.

Next up was the transfer.

Because our ultrasound and lab appointments were at the break of day, we had time to kill before the 11:45 transfer. We spent it at Target where I picked up these groovy lucky socks. These socks were so perfect they jumped into my shopping cart and I was wearing them before we left the parking lot.

Fertility green and orange with the luck of the Irish thrown in for good measure.

So far the knee highs worked their magic.

Ease of transfer is one of the many critical factors that lead to enhanced odds of success. A fundus (top of the uterus) touched by the catheter used to transport the embryo is a lousy precursor for implantation. Much effort goes into making sure the depth and shape of the uterus is understood before the procedure so the doctor can avoid the edges. It’s like that game of Operation we played as kids, except on a fuzzy black and white ultrasound screen with no buzzers to tell you when you screw up. 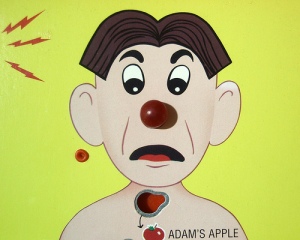 The doctor gracefully guided our little bundle of cells to the exact right spot without a single hiccup.  Dr. S navigated Blob to the sweet spot with the precision of a fighter pilot landing on a aircraft carrier. What makes this feat more impressive is the embryo can barely be seen by the naked eye. Try landing that in a tiny little spot on a computer screen with only a bit of guidance from an ultrasound tech.

Blob was a busy little fellow this morning and hatched completely out of his shell prior to transfer, earning a final grade of 6BB. When the lab flash froze him after genetic testing back in January the embryologist graded him a 5BB. He’s overachieving already. 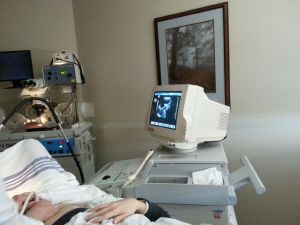 Blob’s incubator in the background

You may be wondering, what the heck do those letters and numbers mean?

Embryo grading is a complicated process, but essentially this means Blob was at stage 5 when he was frozen. This is the final blastocyst stage right before he hatches and burrows into the lining.  The letters are grades for the inner cell mass (ICM) and the Trophectoderm Epithelium (TE). The ICM is a clump of cells that will eventually become a baby. The TE will grow into the placenta which will replace all the hormones I am taking between 7 and 10 weeks.

6BB is a good quality embryo. 6AA would be perfect. Both are fully capable of becoming future Rhodes Scholars.

Blob as a Rhodes Scholar

Typically an embryo reaches stage 6 on the fifth day after fertilization. Blob started slowly and took six days to get there. This is the main reason Dr. S gave Blob slightly lower odds than other genetically normal embryos. However, Day 6 blastocycsts like Blob fair much better with a frozen cycle like ours.  This is due to the surprisingly short window in which the lining is receptive. Unlike in a fresh cycle, in a frozen cycle the doctor can control the timing of the lining receptivity and match it to Blob’s developmental stage, increasing the odds he will stick.

While our overachiever was quick to break out of his shell, he was slow to expand. If you have ever taken a balloon from a warm place out into really cold weather you know it shrivels up and loses its fullness until warmed again. Embryos are the same. They compact when frozen and then begin to expand when warmed. We are slightly concerned that Blob didn’t expand more prior to transfer, but encouraged that he is still developing. Most important, every last one of Blob’s cells survived the warming process.

Post transfer I remained on bed rest for an hour before being wheeled to our car. We are now at the hotel where I will spend today and tomorrow at a 45 degree angle, able to rise only to powder my nose. Butler Bill enjoys this part of the process because it is the time he is most involved in IVF. I enjoy abusing my personal butler and make the most of being cared for by the love of my life at this sensitive stage. 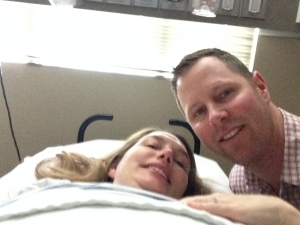 If you look close enough you may be able to see Blob through those nostrils.

Butler Bill will bring me food, water, and medicine for two solid days. I will read, watch stand-up comedy, blog, goof off on the internet, meditate, and try not to obsess about possibilities. I am allowing myself only a half hour with Dr. Google to see what I can learn about slowly expanding embryos. After that half hour I am firing that negative jerk in order to relish being pregnant.

In the IVF community we describe this part of the cycle as being PUPO (Pregnant Until Proven Otherwise). I am so  done with the uncertainty implied by “until proven otherwise.” This mama has decided she is straight up knocked up. I plan to prove it on March 22nd.

15 thoughts on “Knocked Up”

Join 147 other subscribers
Follow Laughter Through Tears on WordPress.com

I Think This is Chapter 4 of My Story